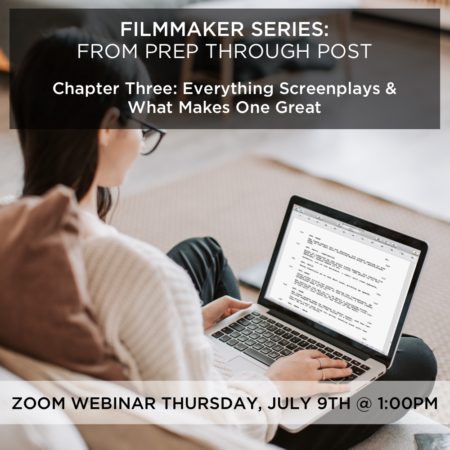 The Blackmagic Collective announced today the third installment of the Filmmaker Series of webinars, titled Everything Screenplays & What Makes One Great, will take place on July 9th at 1:00pm. Chapter three will focus on the process of writing or finding screenplays that work.

The concept of the series is to provide insight from professionals through many steps of filmmaking, from pre-production, prepping a script, working with department heads and casting. The series is intended as a Q&A format “How To” to aid attendees with practical knowledge in various areas of entertainment.

“The script is the most important aspect of the project.” There’s a reason we hear that ad nauseam. The failures of feature projects to even obtain distribution much less box office success often lies in the production team starting with a script that isn’t ready or just plain isn’t good.
We know we must start with a good script, but do we know what makes a good script? Marketability? The Characters? The Story? And should we write it ourselves or find one? And where do we find one?

Hear from film and TV writers and producers on which of their projects succeeded or failed and why they believe that to be the case. They will also give tips and tricks on how to tap into your network to option a great project, as well as thoughts on how to know if your idea is worth the time to write it yourself. Whether a director or producer looking for your next project or a writer looking for inspiration, this is a panel for you!

Registration for the third event on July 9th is currently open. Follow this link to learn more: Filmmaker Series