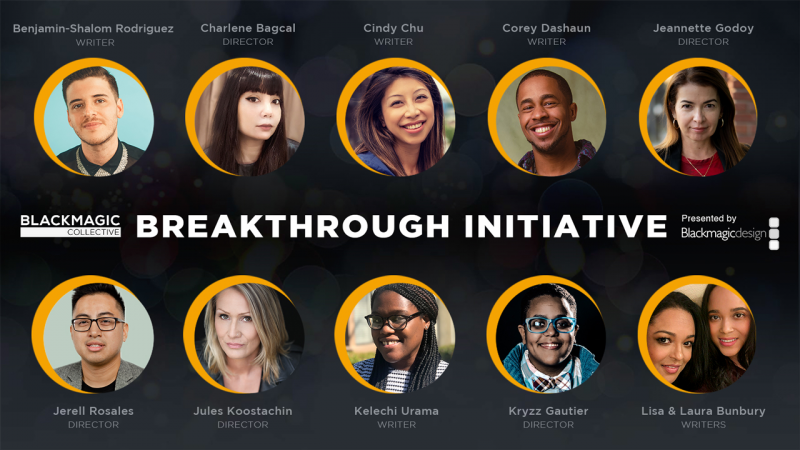 The Blackmagic Collective, presented by Blackmagic Design, is pleased to announce its newest fellowship – The Breakthrough Initiative (BI) – created to champion BIPOC TV directors and writers.  The initiative provides opportunities to a thoughtfully curated group, who already have a strong body of work, to put them on track for their first episodic TV credit.  This initiative is designed to provide exposure for underrepresented directors and writers on the verge. The BI Program aims to fill a gap by connecting these creatives with decision makers.

“We saw a need and wanted to fill it,” says Soma Helmi, current Program Director for Breakthrough Initiative and an Alumnus of the Future Women of TV Program 2020.  “Despite the numerous development programs that have cropped up in the entertainment industry,  there is still a gap in connecting underrepresented creatives with industry decision makers.  Our initiative focuses on opening doors for those individuals who are out there working hard to be heard, so they can make that leap into episodic TV.”

Over the course of a year, the fellows will be introduced to showrunners, executives and other industry leaders, with the objective of positioning them for consideration for upcoming opportunities.  “We want to give these strong, underrepresented voices access that they would not have otherwise.  At that point, their body of work will speak for itself,” says Helmi.

Wendy Calhoun (Station 19, Prodigal Son), who is a program advisor, shared “My career breakthroughs define me and my work— from unscripted to scripted, from being the “only one” to championing inclusion, from student to teacher. I get a kick out of figuring out how to overcome seemingly impossible obstacles. I’m thrilled to contribute and witness extraordinary transformations.”

The Blackmagic Collective has two additional  initiatives. The All Access Initiative is designed to help disabled filmmakers see their projects from script to screen, currently in the final phase of choosing their fellows.  The Future Directors of Studio Features Initiative  is designed to elevate and polish undiscovered and underrepresented female-identifying storytellers who are poised to make the transition to feature directing.  All initiatives are possible thanks to sponsorships by generous companies including the presenting sponsor, Blackmagic Design*.

Jules Arita Koostachin  Jules Arita Koostachin is an InNiNew IsKwew (Swampy Cree woman) and a band member of Attawapiskat First Nation.  Jules was raised by her Cree speaking grandparents in Moosonee, as well as in Ottawa with her mother, a residential school warrior.   She is actively working with the Indigenous community supporting women and children.

Kryzz Gautier  Kryzz Gautier is a queer, Afro-Latina writer/director born and raised in the Dominican Republic. She focuses on Sci-Fi and Genre as she creates complex worlds filled with three-dimensional characters.

Charlene Bagcal  Charlene Bagcal is a Filipino-American WGA screenwriter and a director. She is most notably known for her mysterious, provocative and hyper-visual films always grasping between the surreal and reality.

Jeannette Godoy  Jeannette Godoy is a first generation, Mexican American director/writer. She started her career as a choreographer where she worked in film, television and commercials.

Jerell Rosales  Jerell Rosales is a Filipino-American LGBTQ+ filmmaker. When he’s not behind the camera directing, you can find him behind a keyboard writing. He’s passionate about  dramas/comedies/thrillers with diverse young adults reaching for everything society forbids them to grab. Jerell grew up in military bases around the world, but calls the Inland Empire home.

Cindy Chu  Cindy Chu is an award-winning writer, actress, and producer.  Born and raised in Queens, New York, she is a 1st generation Taiwanese-Chinese American. She comes from a family lineage of refugees and immigrants, and her stories encompass the multifaceted experiences of urban working-class Asian Americans.  In her off-time, she loves solo traveling and running.

Corey Dashaun  Cory Dashaun is a television writer from Rochester, New York. Shaped by his years working as a teacher in the South Bronx, Corey’s work explores children’s adventures and growth as they develop and experience things for the first time.

Lisa & Laura Bunbury  Lisa & Laura Bunbury, sisters, are a Black-Caribbean writing and award-winning producing team.  They enjoy writing multicultural YA, teen/family dramas and dramedies.  In their spare time, they love to cook and can always find something to laugh about.

Kelechi Urama  Kelechi Urama is a Maryland-native and first-generation American born to Nigerian immigrants.  As a screenwriter, she aims to diversify the type of representation we often see of Black women and girls on television. Her protagonists are offbeat, humorous, and relatable. Her work often features a hint of the surreal — which she credits to her Nigerian background.

To learn more about the fellows selected for the 2021 program, visit
https://blackmagiccollective.com/the-breakthrough-initiative/

Founded with the belief that the art of filmmaking should be accessible to all, the Blackmagic Collective is a non-profit that offers a robust schedule of events, training sessions and workshops, panels featuring expert content creators, networking and a film festival celebrating new short works.