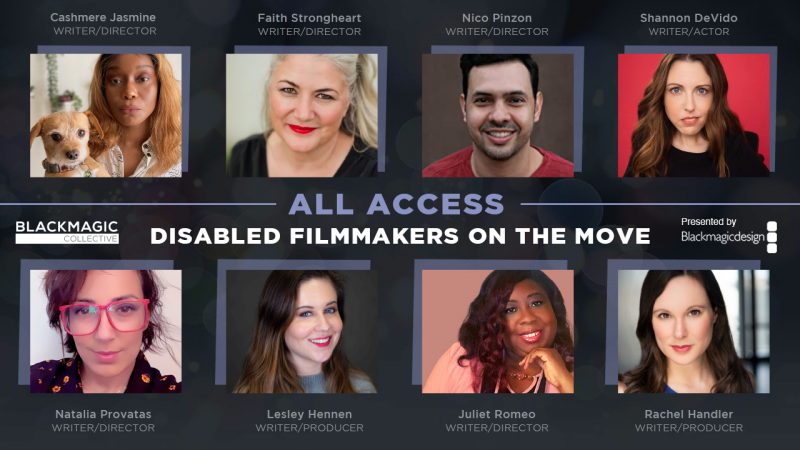 The Blackmagic Collective, presented by Blackmagic Design, is pleased to announce its newest career advancement program – All Access: Disabled Filmmakers on the Move. The initiative is focused on helping disabled writers and directors create valuable contacts with key players in the industry, all in an effort to help accomplished filmmakers make a jump into more lucrative work. The goal of the initiative is to not only introduce the fellows to those in hiring positions, but to open a dialogue with executives about the need for more authentic representation of disability both behind and in front of the camera, and to help foster more opportunities for future work.

“The need for more diversity and inclusive representation in film and TV continues to remain at the forefront of the industry; however, the disability community is all too often overlooked in these conversations,” says Jenn Page, current Executive Director of Blackmagic Collective, and alumnus of the Future Women of TV 2020 program. “Each of the fellows that we’ve selected for the ‘All Access’ initiative are more than qualified and ready to bring their voices and talents to the table. We’re excited for them to connect with more executives and other contacts in hiring positions through the program, to level up their careers and bring even more of their stories to the screen.”

Over the course of the one-year initiative, the curated group of eight fellows, helmed by Initiative Director, Shannon DeVido (Best Summer Ever, Difficult People) will work to develop their marketing packages, including reels and/or pilot scripts; and will also take part in ongoing meetings with showrunners, head writers, and other industry leaders who can help provide great future career opportunities. By the end of the program, fellows will have honed the skills needed to see their projects from script to screen.

“Any filmmaker should have the opportunity to excel in all aspects of the industry without hesitation, regardless of a disability,” says DeVido. “I’m hopeful that the Blackmagic Collective’s ‘All Access’ initiative will open doors people didn’t think could be opened.”

The Blackmagic Collective has two additional career advancement initiatives. The Future Directors of Studio Features Initiative is designed to elevate and polish undiscovered and underrepresented female-identifying storytellers who are poised to make the transition to feature directing. The Future Women of TV had a very successful year in 20020, meeting with over 50 executives, as well as working TV writers and directors. All initiatives are possible thanks to sponsorships by generous companies including the presenting sponsor, Blackmagic Design*.

Meet The All Access: Disabled Filmmakers On The Move Fellows:

More on the program.