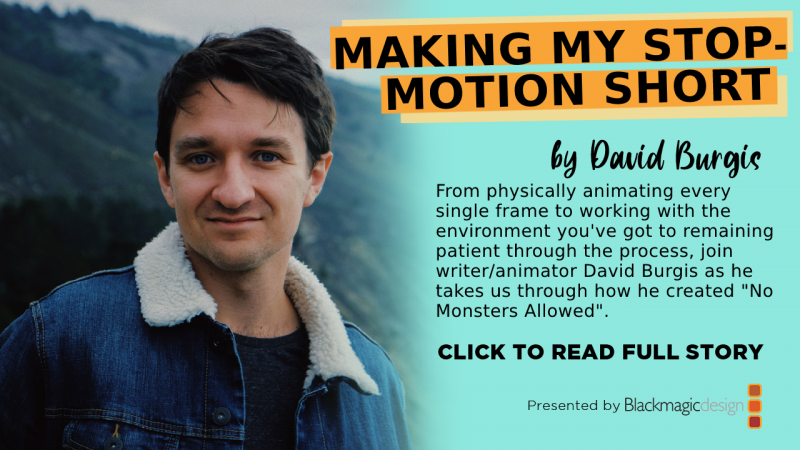 “No Monsters Allowed” is a dialogue-free stop-motion short film about a little girl who gets so scared by the horror movie her older brother watches that she can’t sleep at night. It straddles the line between children’s movie, horror and comedy, all in a 3-minute package that I’m ridiculously proud of.

It’s played at 19 festivals around the world, including Blackmagic Collective’s 2020 short film festival. It helped me go from no animation experience to getting a job working on the stop-motion TV show Robot Chicken. Now that it has mostly finished its time on the festival circuit, I thought I should talk about what I learned while making this film and premiering it online.

I based the script on something that happened in my childhood, but—ya know—with more monsters. When I was nine years old, my older brother Ben watched Mars Attacks! with me. Yes, that Mars Attacks. The goofy one where Sarah Jessica Parker gets fused with a dog. Not the scariest thing. But it STUCK with me. I couldn’t sleep for almost a year—every time I’d close my eyes I’d see those aliens with the rictus smile and exposed brains and shock myself awake. The only way I could get to sleep was if I curled up in bed with my brother and his big black Labrador named Suzy. Honestly, as rough as that was for me at the time (and probably even more so for my parents and brother), it was hugely important to me. I spent a lot of time daydreaming while not being able to sleep, and I started trying to watch more movies to get over it. I got my brother to show me the Nightmare on Elm Street movies, Friday the 13th, The Shining, etc. at a pretty young age. And I even started loving the feelings of being a little scared, though none of them kept me awake to the same level. Writing this was a way to express that feeling in movie form, but, as I said, with more monsters.

I worked closely with producer Jackie Cole, who I’d bonded with over shared love of ‘50s pulp fiction. I like to describe her as the upbeat pirate who would always say “let’s build it!” when faced with a problem. Neither of us had made stop-motion before, but thanks largely to her confidence, we jumped into it. 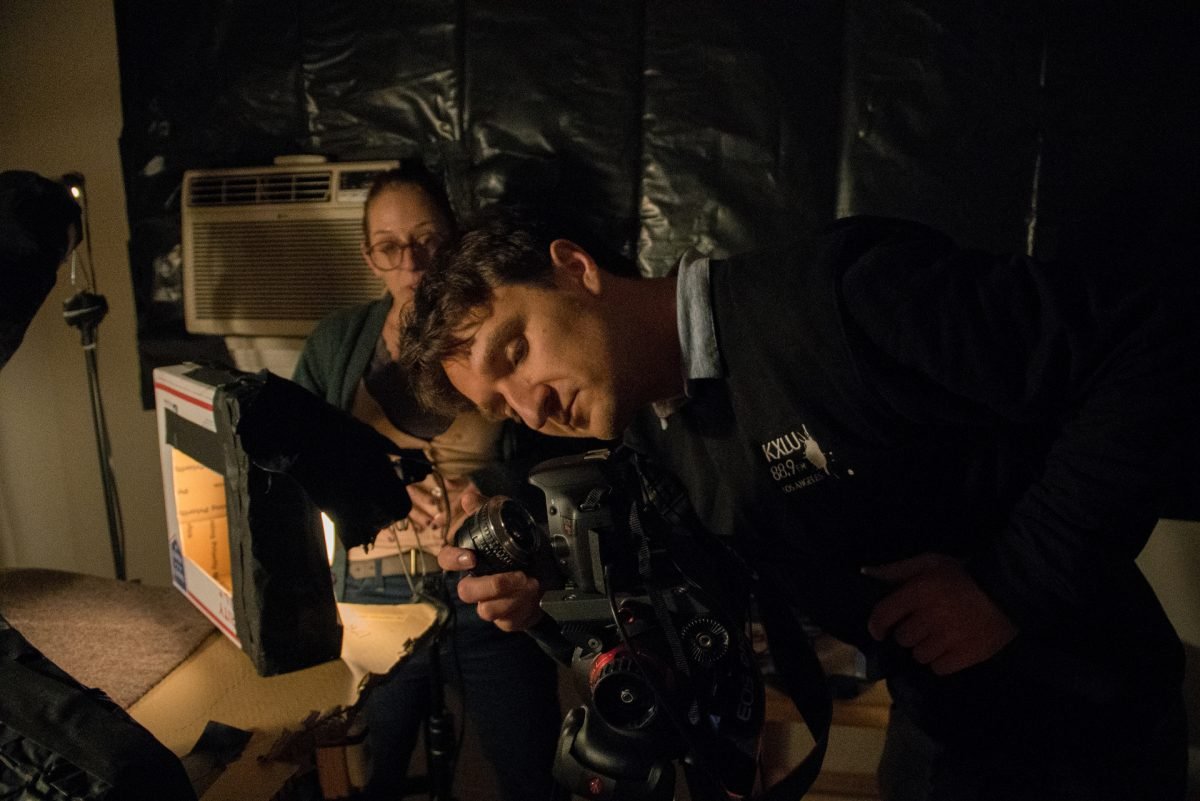 Stop-motion can be made in a lot of different ways, ranging from sand animation, Monty Python-style cutouts, to using toys. For the look we were going for, we talked a lot about Coraline and The Nightmare Before Christmas, among other movies that used this style of filming, the art of Mark Ryden, and the visuals of early 80s horror like The Thing, Poltergeist and Gremlins.

The set was a small stage that I put in my bedroom (that turned out to be the only place in my apartment with windows that could be boarded up completely to block outside light). 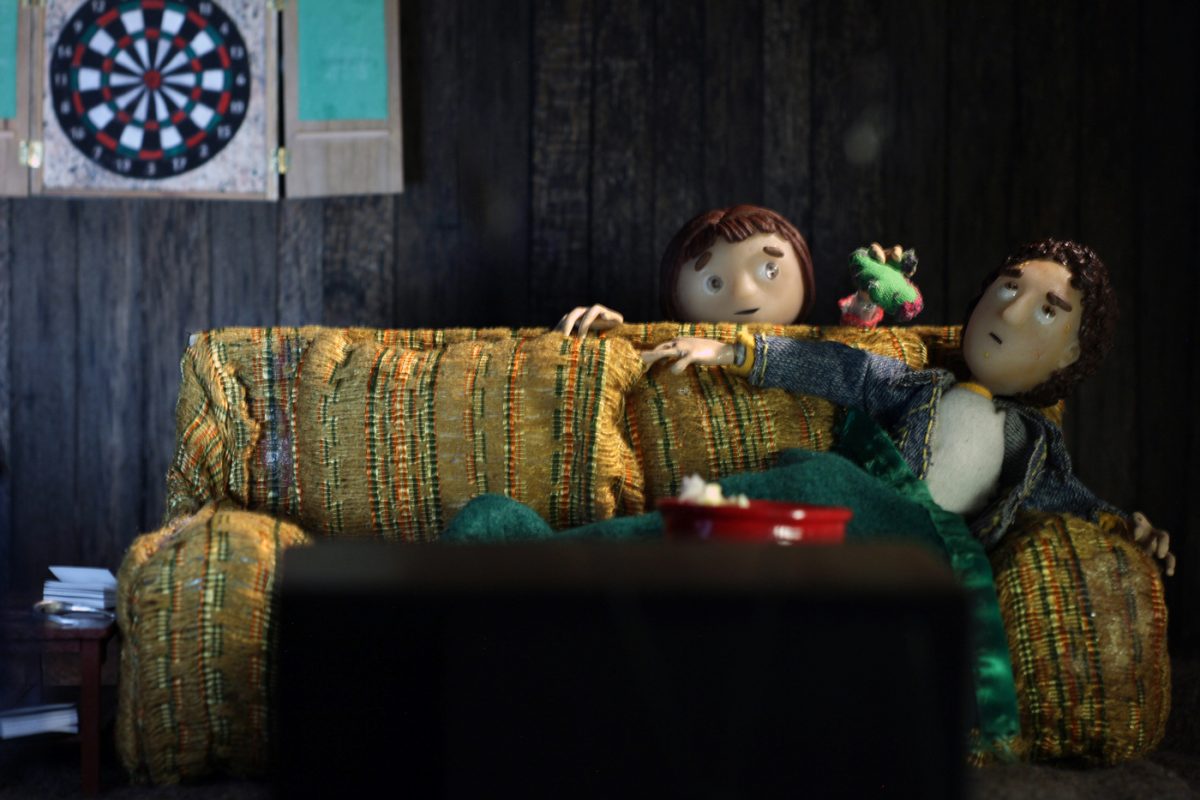 In order to match more of the vintage early 80s feel, we used Nikon consumer camera lenses from the late 70s/early 80s, and for a camera we just used a 10-year-old Canon camera. This ended up being totally the right call for us, because it was a camera that was okay to keep out of commission for awhile: this was one that I could comfortably just use through the whole process without having to worry about either crazy rental fees, or it being needed for something else. Which turned out great, because all told, once we started filming, it took about a year to make.

Because it’s stop-motion, we had to physically animate every frame. So I would set up a shot with the help of the DP Doug Frerichs, then after lighting he would leave and on my own I would figure out the animation moves, and then photograph each frame one at a time. What really made that work was discovering a program called DragonFrame that interfaces between the camera and the computer (and is pretty much the industry standard for professional stop-motion). It lets users compare each frame someone’s capturing to other ones, and I genuinely don’t think I could have animated remotely as well if I didn’t have this tool to make sure the motion was right.

The process itself was incredibly rewarding and fun to do, but it’s not for everybody. The amount of patience that’s required to animate just a single second isn’t for everybody. To give it a little more of a handmade feel, I didn’t animate 24 frames to the second, instead I “shot on twos” which means every frame would hold for two frames, but even so every second of animation was 12 still images strung together. Each of the three scenes took approximately a month or two to animate, because I would aim to do approximately a shot a day, or about 6-15 seconds of final footage. On top of that, we started shooting before all the props and puppets were complete, so I’d step down production in order to get the rest of the materials together. 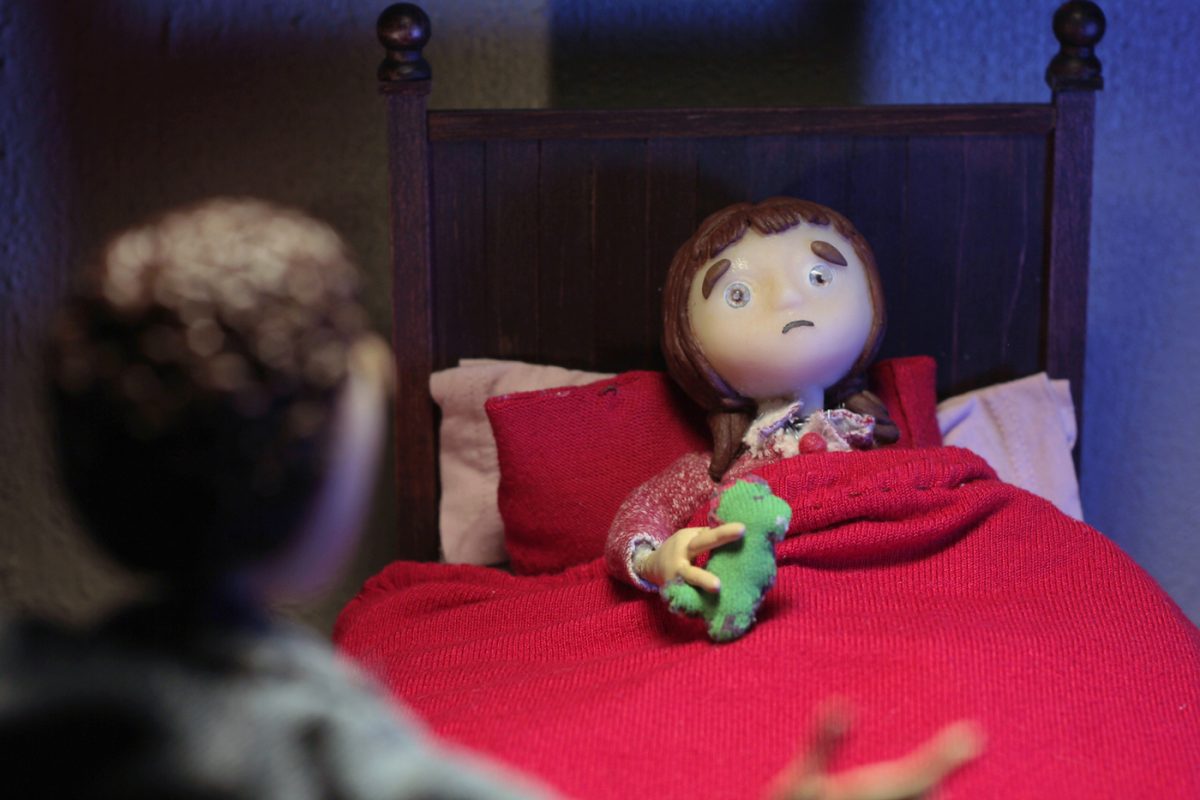 Genuinely there’s no way we could have made this without our incredible community. And more than anything else, it couldn’t have happened without my brother Ben. Both for watching that scary movie with me in the first place, but also being there afterwards when I was scared, and helping me get over those fears. To this day, one of the things we always do is watch horror movies together. I hope this can go on the rotation along with the other classics we watch over and over again. But maybe I’ll still leave Mars Attacks! off that list.

Jackie spearheaded the set design, along with the help of Adam Holmes, Aaryn Banks-Levine and Sway Benns. Our characters were designed and fabricated by Sabrina Cruz Castro, costumes made by Odette Mattha, creatures fabricated by Mark Jones, and designed by Mike Coronado. Doug Frerichs lit and color corrected everything, WT Paterson composed the music, Chris Willett edited, Tasha Skotnicki sound designed, Megan Lutz mixed, and Scott Key did visual effects. And a whole world of people outside of these individuals assisted throughout the production of this film in both big and small ways.

David Burgis is a writer/animator living in Los Angeles.