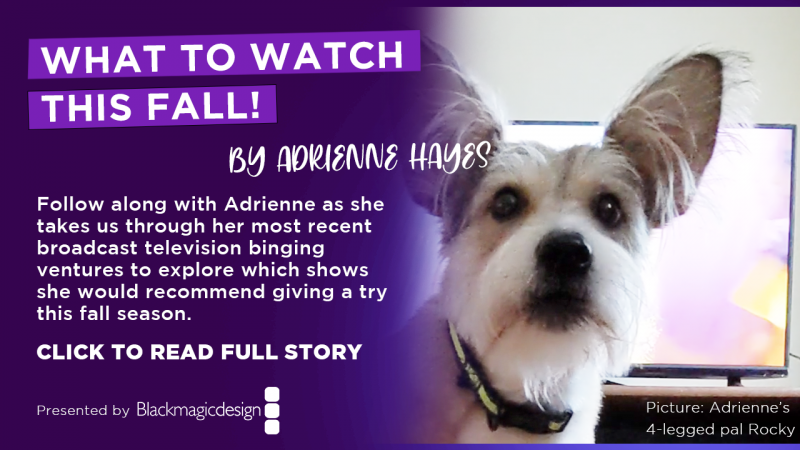 TV and movies are my heart! I especially have a soft spot for broadcast TV.  It’s one of the only things still largely accessible to so many people no matter their financial status, and the networks seem to be pushing their stories to be deeper and have higher production value now that they compete with the big streamers. TV is also where we can really get to know the characters, we’ve fallen in love with for more than a two-hour window. Week after week (or as with Netflix, a 10-hour binge day), we get swept away into amazing stories and let all our troubles slip to the side. I’m so excited to share my joy for the small screen with you all and my thoughts on all the new shows!  As more release I will continue to update this blog page. Let us know which ones you loved! (Note: these are meant to be spoiler free, but we apologize if anything slipped by us).

Have you ever been incredibly excited about something and then right before it finally arrives, you panic because you wonder if anything can possibly rise to level of your excitement? That was me this Wednesday regarding The Wonder Years on ABC and let! me! tell! you! by the time it ended, half of me was crying because of the show and the other half was crying because for me, it is absolute perfection. I cannot recommend this show highly enough. My heart runneth over.

I so wanted to enjoy this! Sadly, I spent the entire episode wondering why the show was made at all. FBI continues to be solid as is FBI: Most Wanted. FBI: International brought nothing new to the table except for two extremely stiff leads. I hope it will improve in time because I really enjoy this franchise.

Full disclosure: I don’t watch any of the other NCIS shows. That may explain why I found NCIS: Hawai’i to be enjoyable where so many others grumbled about it.  I don’t know if I would go as far as to say that it’s good, but it’s got a likeable cast and goes down easy. File it under “comfort TV.”

What to make of Fox’s newest “wait, what?!” competition series, Alter Ego, which debuted Wednesday night? My favorite part was something that happened at the very end, but I won’t spoil that for you. I wasn’t really hooked, but I do appreciate the novelty of it.

Oh, how I love The Big Leap and strongly suspect it will find a passionate audience quickly! If you have a heart for underdogs, second chances, and dreaming big in the face of life’s obstacles and drama, I have a feeling you will love this show, too.  Simone Recasner gives a stand-out performance in the first two episodes, and I look forward to seeing her career blossom.

Our Kind of People

Our Kind of People debuted Tuesday night on Fox. I was eager to see what Yaya DaCosta would leave Chicago Med to do because April was an amazing character and I will miss her. After watching the pilot, I’m not yet sure if I’ll stick around. If it’s a drama with a penchant for going off the rails, it could be a lot of fun. If it’s an emotional drama that gives DaCosta room to show her range, that could be excellent. This is Lee Daniels, so I’m guessing it’s probably the former, so let’s see what week two brings. And let us not forget how wonderful Joe Morton is. He makes everything he’s in better and doesn’t get nearly enough credit for that voice! Yeah, I’m probably spending the fall in Oak Bluffs.

Huh. La Brea was a spectacle more than anything else. It feels very much like a mosaic of all the disaster and supernatural broadcast fare that came before it. I don’t know that the show is bringing anything new to the genre. If you like these kinds of shows, maybe you’ll enjoy this. I might try another episode or two, but will be pleasantly surprised if I stick around the entire season. I wish the pilot showed us what sets it apart!

Monday night brought us the debut of Ordinary Joe on NBC. It’s not appointment viewing for me. It has a likeable cast, but it felt a little sleepy to me and I’m someone who likes an early bedtime, so a 10 p.m. start is a big ask and in Ordinary Joe’s case, too big of an ask. I will give it another episode to see if the pilot was just…well…piloty. But not until the next day on Peacock!

I didn’t know what this was when I hit play and I think that’s a good way to jump into this series, so I will just say that the first episode and the second episode could not be further apart in tone, be prepared for that. Overall, I found The Premise to be smart and well done. It asks questions and shows a scenario, but still leaves room for examination.

To quote my friend, Angie: “It’s pleasant nonsense.” I hope you will give it a try because amidst all the serious and dumb stuff out there, there’s something comforting about pleasant nonsense. It’s funny and hard not to enjoy watching and rooting for the competitors. I enjoy Frogger so much more than I expected!

To keep up with Adrienne and her thoughts on new shows as they release, follow her here.

Share This
Why I Love These Cameras?
Disabled But Able