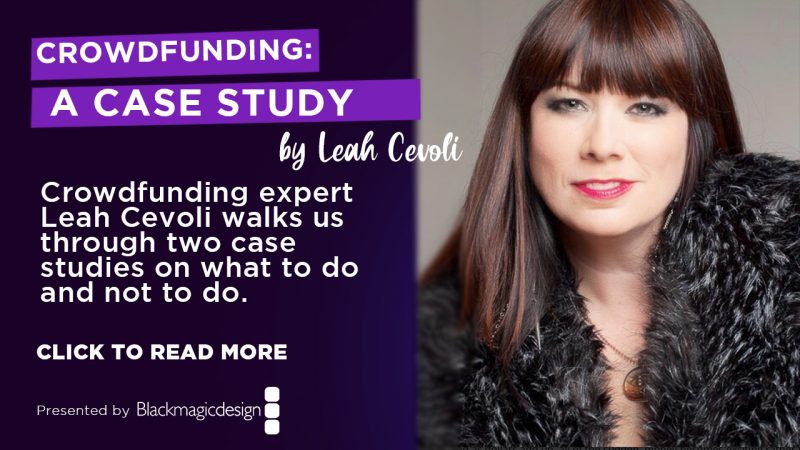 Unless today is your first day on the internet, you’ve probably come across a few crowdfunding campaigns, perhaps you’ve pledged to one, or maybe you’ve even participated in or run one yourself. Either way, I don’t think I need to remind you that it’s hard work, and yet I’m about to.

See, I’ve managed somewhere around 75 successful campaigns and coached and consulted on hundreds more and I can pretty much spot a winner right off the bat.  Now, not everyone that I thought was a winner ended up winning, but for the most part they have.  I can also usually tell when someone just doesn’t have what it takes to crowdfund, or at least isn’t ready yet.

Recently, I got to witness 2 extreme examples happening almost simultaneously in front of me.  These clients were very similar.   Both very young, just out of film school, with limited real-world experience, limited connections, and small social media followings.  Both clients had written their short films and planned to direct them.   Their monetary goals were similar, and their passion for filmmaking was undeniable.

One client exceeded her goal, while the other client, struggled to hit his goal, and had to lean heavily on family to pull it through.  What was the difference?

1)      Preparation:  – Preparation is a key ingredient for crowdfunding.

Client A – took 3 months after our initial strategy session to prepare her campaign, to hire help, to plan her crowdfunding calendar, to build her social media, and to prep her family and friends. Even going so far to prep additional video content that would just need some final edits before publishing every week.

Client B – took 3 weeks, after our initial strategy session to attempt to prepare his campaign, hire help, plan a calendar, launch some social media pages and prep family and friends. Everything and everyone felt rushed.  Including the pitch video which is essential to a successful campaign.

Although your campaign itself is only 30 days, most successful campaigns prepare for months if not longer.  This includes not only building up your social media and the key assets for your campaign page itself, but preparing yourself mentally and getting really, really organized about your work flow, your team, and your crowdfunding calendar.  Clearly Client A took this preparation period much more seriously than Client B, and it showed.

2)      Teamwork – Communication with your team is of utmost importance.

Client A-   stayed in contact with me the whole time, asking questions, offering suggestions, sticking to the calendar and even adding more items and ideas as we went along. She sent a daily email before bed every night, with her ideas and plans for the next day, thus giving me time to give her feedback and have it waiting in her inbox when she started the next day.  She stuck to the calendar deadlines she had given herself at the beginning, releasing new material and campaign updates as planned.  She was very hands on with her social media posts, even with a social media manager on the team.  She prepared personalized posts/tweets to be shared along with each day’s crowdfunding posts – thus bringing a much more personal and authentic feel to her public social media pages.

Client B – went MIA for days at a time, rarely checked in, continually missed deadlines, and constantly pushed calendar items back due to the content not being ready as planned.  Never once communicated with the social media manager about anything, and never supplied any additional content that could be considered personal.

When you have a team, utilize them!   Outside of myself and the social media manager, both clients were pretty much on their own, sure they had some cast/crew attached, but none that were really giving them a ton of support, but they had us.   Clearly Client A, utilized her small team very efficiently, whereas Client B, seemed almost oblivious to the importance of communicating with us.

3)      Personal Outreach – Outreach is truly the make it or break it for crowdfunding campaigns.

Client A – Personalized her email outreach and continually fine-tuned her message for different chunks of her network and community.  She followed my social media guidelines, went above and beyond her comfort zones, and continually came up with new lists of friends, colleagues, and associates to do outreach with.

Client B – Sent out a generic email, even after explicit instructions to personalize it.  He followed some of my social media guidelines but refused to do anything that was out of his comfort zone, and continually said he couldn’t think of anyone else to reach out to.

If you haven’t figured it out yet, posting on face book just isn’t enough to fund a campaign.  It involves personalized emails, messages, texts, phone-calls, and continuous follow-ups on all the above.  It might be out of your comfort zone, but if you keep at it, it will pay-off.  Client A was continually surprised and delighted at the people from all areas of her life that pledged, whereas Client B saw less than 1% of his community pledge, while many of his pledges came from his parents.  My guess is that most of his community didn’t realize he needed their help, because his personal outreach was lacking.

In the end both clients are heading into production on their projects, and that in and of itself is something to celebrate.  Client A had a much more satisfying and rewarding crowdfunding campaign.  Not only did she raise the funds, but she strengthened her community, her name, and her professional reputation.  She built new relationships, expanded her network, and received praise and acknowledgement from those that saw the effort she was putting out and the results she was getting.

It’s up to you of course, how much planning, communicating, and outreach you’ll do for your campaign, no one can do it for you.  But don’t say I didn’t warn ya.